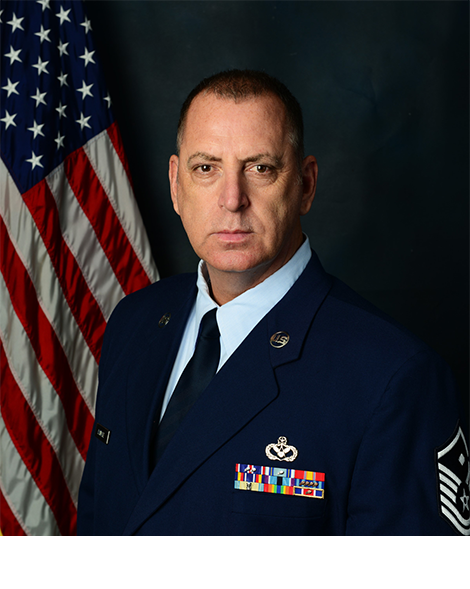 SMSgt John W. Randall is currently serving in the Air National Guard as the Human Resource Advisor for the 147th Attack Wing. The HRAS serves as an advisor for the wing on behalf of the Commander. As the HRA he is the spokesperson on Diversity, Inclusion, and Force Development for the Commander while serving enlisted force at the wing. He represents the highest level of leadership and as well as the focal point for all personnel.
(469) 646-6350

Senior Master Sergeant Randall joined the Army in October 1982 and graduated from Basic Training and Advanced Individual Training that same year. During his 11 years at the Co B 682nd Engineers Battalion he alternated Annual Training between Fort McCoy Wisconsin and Camp Ripley Minnesota. This was at the same time that he was going to school working on his Bachelor's degree. He spent those years training on advanced infantry training and combat engineer specialties. After 11 years in the Illinois Army National Guard MSgt Randall took a seven year break and then joined the Texas Air National Guard (TXANG) in the field of fire protection. Since joining the TXANG he has been all over the world training as a Fire Fighter to include but not limited to: March AFB, Anderson AFB, Tyndal AFB, McGuire AFB, Minot AFB, Dyess AFB, and Mildenhall AFB. This is in addition to training received in various locations in Houston. He has served during Hurricanes Rita, Ike, and Harvey in addition to other tropical storms in the Houston area. During the course of the last three year as First Sergeant for the 147th Civil Engineering Squadron, SMSgt Randall has served the First Sergeant Council as Recorder and Vice Chair. In addition to his day to day duties as First Sergeant he has traveled to Germany to receive and transport an airman with PTSD home. He has counseled and supported an airman's family during times of personal loss (death of a child). SMSgt Randall has used his personal time and skill set to aid the airmen and support the mission.

SMSgt Randall was a Firefighter with a local Fire Department for 20 years. During his time as a Firefighter he additionally was a part time Adjunct Instructor at the local Fire Academy. In 2014, SMSgt Randall was promoted as the full time Fire Academy Coordinator. His AFSC combined with his civilian profession account for a 25-year career in the Fire Service. Because of his experience in the Aircraft Rescue Fire Fighting (ARFF) career, he was able to obtain his private pilot's license along with over numerous state certifications in the fire service. He also sits on advisory councils for the local fire community. SMSgt Randall is finishing up his Master's degree in Clinical Mental Health at Lamar University.